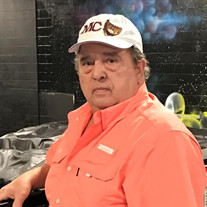 Thomas Ralph Fico, 74, passed away June 19, 2022, in Madison Florida, following an extended illness.. Tom was born January 20, 1948, in Bayonne, New Jersey to Thomas A. and Mary Provino Fico. Before attending college, Tom played drums in a “rock and roll” band called “The Feathers.” The band toured the East coast and recorded a single hit record before breaking up in 1970. It was then that Fico moved to the state of Florida and attended college at Broward Community College and The University of South Florida. In 1977 he received a Master of Science Degree in Chemistry from Florida Atlantic University. His original research (along with his professor) was published in The American Institute of Physics and the Journal of Organic Chemistry. Tom worked in private industry in south Florida until his arrival at North Florida Junior College in 1981. Tom retired from North Florida Community College in 2002 after teaching Chemistry, Physics, Organic/Inorganic chemistry for 22 years. He loved teaching and many of his former students are successful physicians, pharmacist and other professionals. While at the college, Tom worked with the Brain Bowl team and under his leadership, NFCC teams won Panhandle Championships and were finalists at state competitions. He retired in June of 2002. Following retirement, Tom continued working in his private water testing business (Chemsultants) until his health forced him to fully retire in 2007. Following retirement, Tom was an active member and officer of the Florida branch of the American Chemist Society for 25 years. Tom was a member of the First Baptist Church in Madison since 1981. His membership activities included singing in the church choir, playing the drums in the orchestra, serving as a Deacon, and filling in as SS teacher and music leader. He was well known in the church and community for his Italian cooking and music (drums). He was also an environmentalist, actively recycling before recycling began and helping to establish amnesty days. Tom was preceded in death by his parents, Tom and Mary Fico, and his sister Carol Fico. He leaves behind his wife of forty years, Nita, two sons Damon (Lindsay) of Macon, Georgia, and Robert C. Fico (Courtney) of Valdosta, Georgia, five grandchildren, and several aunts and uncles, nieces and nephews, cousins, and dear friends. A celebration of life service will be held Saturday, 11:00 am, June 25, 2022 at Beggs Funeral Home. The family will receive visitors immediately following the service. The family is gladly accepting flowers, or in lieu of flowers, you may make donations to the Suwannee Valley Animal Shelter located in Lee, Fl. (1156 SE Bisbee Loop, Madison, Fl. 32340) or donate to the music ministry at First Baptist Church in Madison, Fl. Beggs Funeral Home, Madison Chapel is assisting the family with arrangements 850-973-2258. You may send your condolences to the family by visiting our website at www.beggsfuneral.com

The family of Thomas Ralph Fico created this Life Tributes page to make it easy to share your memories.