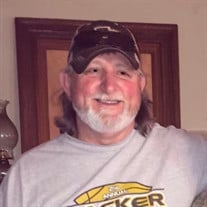 Heaven needed somebody who "knows an ole boy" and that day came on September 8, 2021. James Ancel Pickles, Jr. flew home to be with his Lord and Savior. He was 62 years old. Jimmy was born in Monticello, Florida on April 20, 1959 and raised in Greenville, Florida. After completing High School, he enlisted in the United States Marine Corps. After his service to his country, Jimmy returned to North Florida where he eventually was employed by the Florida Department of Corrections. He worked at Mayo, Hamilton, Taylor and Jefferson Correctional Institutions and achieved the rank of Captain before retiring in 2010. During his career in the Department of Corrections, Jimmy was very well respected and beloved by the staff who worked with and for him. He was even known to shake hands with former inmates years after he had retired. Strangers? Jimmy never met a stranger. As a matter of fact, strangers would often think they had already met him. He was beloved by so many people coming and going, and would give anyone the shirt off his back. A true angel on Earth. Jimmy loved his family with everything in his being. Reminding them how spoiled rotten they all are was one of his daily speeches followed up by "That's how it's supposed to be, ain't it? That's my job!". And what a fine job he did. If you were a friend of Jimmy's you were a friend for life. If you worked by his side - his brother. A knife or gun enthusiast - his kindred spirit. A Gator fan - all of the above. The only requirement was a well-charged cellphone and to be ready to jump in his truck when he showed up. Jimmy will be sorely missed by his wife, best friend and sweetheart of 39 years, Patricia Tompkins Pickles; daughters Kemon (Joseph) Livingston, Deda (Matthew) McCray; grandchildren Rhiana Bean, Lea Bean, Brandon Livingston, Nicole Livingston, Mason McCray, Davin McCray, Launa McCray; and great grand-son Mylo McCray; 8 siblings — Joe (Irmgard) King, Kathy (James) Adams, Patsy Webb, Henry King, Geraldine Beggs, Shirley King, Cully (Tracy) Pickles, and Wanda Townsend; also a host of nieces and nephews. He is predeceased by his father James Ancel Pickles, Sr., mother Willie Mae "Bill" Handley Townsend, stepfather Wayne Charles Townsend, and sister Sheila King. Services will be held on Sunday, September 19, 2021, at 3:00pm in the Beggs Funeral Home Madison Chapel followed by interment at Evergreen Cemetery in Greenville, Florida. There will be a visitation from 2:00pm – 3:00pm prior to the service. An outdoor celebration of life will be held in Lee, Florida after the interment. Information will be posted on the family's Facebook pages. T.J. Beggs, Jr. & Sons Funeral Home of Madison, Florida will be serving the family. You may send your condolences to the family by visiting our website at www.beggsfuneral.com or call (850)973-2258.

Heaven needed somebody who "knows an ole boy" and that day came on September 8, 2021. James Ancel Pickles, Jr. flew home to be with his Lord and Savior. He was 62 years old. Jimmy was born in Monticello, Florida on April 20, 1959 and raised... View Obituary & Service Information

The family of Mr James Ancel Pickles Jr. created this Life Tributes page to make it easy to share your memories.

Heaven needed somebody who &quot;knows an ole boy&quot; and that day came...