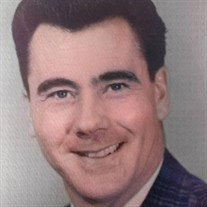 James (“Jim”) Jenkins, 88, passed away suddenly and peacefully at his home in Madison on Friday, May 21st. He was born in Alberta, Canada, and was a veteran of the Canadian Navy. He is survived by his loving and beloved wife (Rosalyn Jenkins, whom he always referred to as “Sloopy”), a brother Bill (of Calgary, Alberta, Canada, married to Alice; and their three children Jacki, Valerie, and Rodney), and a far-flung extended family including a step-son Greg Broyles (of Hayward, Wisconsin, married to Keetha Broyles), a step-daughter Jeanette Broyles (of Carrollton, Georgia, spouse Mark Kunkel), and numerous grand- and great-grandchildren. After a stint as a fireman in the Canadian Pacific Railroad, Jim spent most of his working life as an enthusiastic and distinguished radio personality, serving as AM and FM program manager and disc jockey in Canada, in Nassau (Bahamas), in Miami, in Ft. Myers (WINK) and most recently (until 2007) at WMAF in Madison. He was especially proud of having interviewed numerous stars and celebrities, including Larry King. He loved music, and he loved lending his rich baritone and lively enthusiastic story-telling touches to his many appreciative listeners. For three years he was the first State Park Ranger and Law Enforcement Officer serving on a remote and much-loved Florida barrier island, Cayo Costa. He spent the last 15 years of his working life as an airport police officer serving in the Southwest Florida International Port Authority Police Department (in Ft. Myers, Florida). He was a hard and diligent worker, who after his retirement continued to enjoy music, gardening, and especially his devotion to his beloved cats and to his life’s companion Sloopy. He had lived in Madison for 27 years, and gratefully called it home. A proud son of the South, Jim was also an enthusiastic member of the Sons of Confederate Veterans, and a student of history. In his youth he was also a skillful semi-professional hockey player, fiercely guarding the net in the days before face masks and extensive padding. He always spoke fondly of his hockey days. The burial will be private. Previously expressed condolences are much appreciated. Beggs Funeral Home is handling the arrangements 850-973-2258 You may send your condolences to the family by visiting our website at www.beggsfuneral.com

James (&#8220;Jim&#8221;) Jenkins, 88, passed away suddenly and peacefully at his home in Madison on Friday, May 21st. He was born in Alberta, Canada, and was a veteran of the Canadian Navy. He is survived by his loving and beloved wife (Rosalyn... View Obituary & Service Information

The family of Mr James Jenkins created this Life Tributes page to make it easy to share your memories.