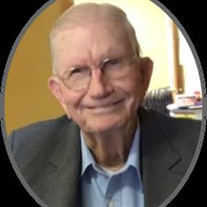 Elbert Franklin Strickland, 93, of Madison, Florida, went home to be with the Lord October 26, 2021 in Madison, Florida. Elbert was born on February 26, 1928 in Madison, Florida to Johnny and Eva Strickland. After graduating from High School, Elbert attended Florida Southern College in Lakeland, FL as a pre-med student. He left college to come home and help take care of his family. He was employed by the United States Postal Service where he served for 38 years, 19 of which were as Postmaster, and received several awards. His early years at the Post Office were interrupted by the Korean War where he served his country in the United States Air Force. Elbert was a very active member of the Hanson United Methodist Church, where he served as Adult Sunday School teacher for many years and held various offices. He was instrumental in the founding of the United Methodist Cooperative Ministries, where he actively served in programs and activities. He was also a member of the American Legion where he could continue to support his country. Elbert was a farmer, raising Black Angus Cows and bailing his own hay. When he was young, he and his dad grew tobacco and harvested turpentine. He grew a large garden each year and shared his harvest with members of the community. He received numerous farming awards including an award from the Suwannee River “This Farm Cares” program for the way he operated his farm and kept records. Elbert is preceded in death by his wife, Louise Strickland, brothers: Leon Strickland (Lou) and Wilmer Strickland. He is survived by 2 daughters: Connie Peterson (Pastor John), Carol Rykard; 1 son: Glenn Strickland (Tiffany); 1 sister: Eunice Rowell; 1 sister-in-Law Pauline Strickland; 6 Grandchildren: Associate Pastor Dillon Rykard (Kendra), Nicolas Rykard, Eric Rykard, Zackery Peterson, Courtney Strickland and Camryn Strickland; and a host of cousins, nieces, and nephews. Elbert loved his Lord, his family, his church, and his country. He worked hard, served others, and treated everyone with dignity and respect. He will be missed by all. Funeral services will be Saturday 2:00 PM. October 30, 2021, at Hanson United Methodist Church, Hanson, Florida with burial at Hanson Methodist cemetery. Visitation will be Friday from 6 – 8 PM at Beggs Funeral Home, Madison, Florida.. Beggs Funeral Home is handling the arrangements 850-973-2258. You may send your condolences to the Family by visiting our website at beggsfuneral.com

The family of Mr. Elbert Franklin Strickland created this Life Tributes page to make it easy to share your memories.